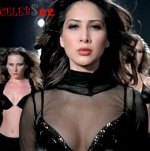 Kim was born in Ahmednagar to an Indian father and a Japanese mother and did her schooling at St. Joseph’s Convent in Panchgani. She then returned to her hometown and joined a junior college. Of her college days, she said ‘Having studied in a boarding school, where most of the girls were from aboard, living and studying in Ahmednagar came as a culture shock’. While in her twelfth standard, she decided to quit studies. Her niece used to study in Army Public School of Ahmednagar. As one of the famous faces of Ahmednagar college, she was offered many fashion shows and modeling.
In August 2011 it was revealed that Kim had secretly married a Kenyan businessman named Ali Punjani, who she had been dating for a few weeks.