Bangladeshi Model Shokh With Other Celeb

Bangladeshi Model Shokh With Other Celeb 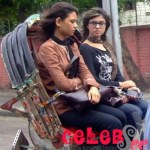 Anila Naz Chowdhury (Bangla: অনীলা নাজ চৌধুরী) (born November 23, 1979) is a Bangladeshi female singer who started working with Fuad al Muqtadir, a renowned music director. Anila’s “amra kromos” is a bengali version of “bring me to life” by Evanescence.
Anila spent some time in the United States. She studied at Mount Holyoke College and Tufts University in Massachusetts. She also worked at Microsoft Corporation in Redmond, Washington.
Prior to her collaboration with Fuad, she had a brief stint with the band Kranti where she produced some hits such as ‘Nobina’ and ‘Brishti Kobor Bhejai’. Her best songs, however, were the ones sung under Fuad’s direction. She along with Suman of (Aurthohin) and Topu (Yatri) produced some massive hits during the years of 2007 & 2008 in Bangladesh. These songs include Nupur II, Gaibo Na, Ghum Parie Dao & Tomar Jonno.